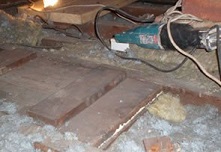 This year alone has seen two people who lived in homes with Mr Fluffy insulation diagnosed with mesothelioma. Mr Fluffy is an insulation brand that was once used in many homes across Australia. The loose-fill asbestos has seen several cases of mesothelioma arise, with seven diagnosed in Canberra just last year. It has also seen Mr Fluffy homeowners develop tumours and other diseases, which are also assumed to be linked.

The danger of living in these homes

Spokeswoman for the Fluffy Owners and Residents Action Group, Brianna Heseltine, has said that this matter has to be taken more seriously to help fix the problem. Having lived in a Mr Fluffy home herself, she is aware of the risks, saying that if left unresolved, the loose fibres can be deadly. Luckily, Heseltine and her family became aware of the problem before it affected them, but for many others it is now too late.

Some experts, such as acting chief health officer, Andrew Pengilley, have said linking the homes with mesothelioma is not wise and there is not enough evidence to prove this is the cause. It is believed that the risk of disease from living in a Mr Fluffy home is low and that the two cannot be considered related in all cases.

Stay informed by signing up with the national asbestos exposure register

Despite this, experts on both sides are encouraging residents to sign up with the national asbestos exposure register to stay informed. For those who believe they may be in a Mr Fluffy home, it is important to organise an inspection as soon as possible and stay out of your home until it is found to be safe.

For those already affected by mesothelioma or another asbestos related disease, support and guidance can help. The Asbestosis and Mesothelioma Association of Australia (AMAA) help thousands of Australians across the country with counselling, support and medical and legal guidance. Call 1800 017 758 to speak to a representative from the group today.