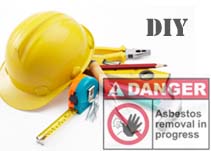 Up to one in three houses built before 1987 are likely to have asbestos products in them, and that is causing a record number of asbestos-related diseases in increasingly young people who have contact with it in DIY situations.

Whether exposed to it during childhood when their parents were doing home renovations, or more recently through their own DIY, people in their 20s and 30s are now being diagnosed with diseases such as lung cancer that can be traced back to an asbestos-related origin.

The Asbestosis and Mesothelioma Association of Australia’s secretary, Nic Boss, said that: “Normally people would not be affected until retirement age, but it is creeping forward with cases now showing up in those as young as their 20s or 30s.”

Trevor Jones began working with asbestos as a carpenter from the age of fifteen—when he had no idea what asbestos was—and he has since been diagnosed with a chronic dust-related lung condition. He also spoke of someone who lost their son in his mid-twenties after he had crawled through home renovation asbestos dust as a toddler.

The Coast and Tweed region is estimated to have the highest number asbestos-related disease diagnoses in Australia, partly due to the popularity of home renovations, and the number of diagnoses does not seem to have peaked yet.

Since asbestos was banned outright in 2003, The Australian Mesothelioma Registry predicts that the Australian peak in deaths from mesothelioma will be between 2014 and 2021, while The Australian Institute of Health and Welfare has reported that up to 18,000 Australians will be affected by the disease by 2021. Neither Asbestosis nor Mesothelioma, two of the major conditions caused by asbestos, are curable.

Queensland Master Builders Association regional manager John Duncalfe warned that people see renovation television programmes and think that it is easy, but that they don’t do the necessary safety checks: “Doing a renovation is not such a simple job because while it may save you a few dollars, it could cost your life.”