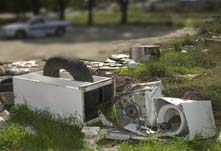 The south east Queensland city of Logan has been forced to take action to stop the illegal dumping of various items. With things like asbestos, furniture and white goods known to be the most-dumped items across the city, Logan City Council has had to respond by increasing video surveillance to catch offenders.

Video evidence has already caught several illegal dumpers who were found discarding waste. The first offender was caught dumping over 200L of soil and rock waste in Cedar Creek, while the second offender was caught dumping grass clippings and tree vegetation in Eagleby. The offenders were fined $1,760 and $220 respectively by the council for breaching the Waste Reduction and Recycling Act 2011. The two were also directed to remove all waste from the area.

The Logan City Council also subsidises waste disposal and offers four free tipping vouchers annually for residents. These initiatives have seen a significant improvement in the waste disposal methods of ratepayers but there is still room to grow.

Dumping waste illegally can have serious consequences for the community and the environment. It not only costs ratepayers thousands of dollars annually, but can also damage the flora and fauna, as well as the city’s overall image. And, for those dumping things like chemicals and asbestos, the consequences could even relate to the health of individuals within the community, with the diseases borne from asbestos now well known around the world.

Disposing of waste safely is a rule for a reason and has more benefits than many are aware of, particularly regarding items such as asbestos. For more information regarding this or how asbestos can affect others, get in touch with the Asbestosis and Mesothelioma Association of Australia (AMAA) on 1800 017 758 today.