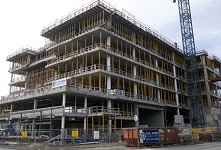 In the past year, building materials firm, James Hardie, has seen their net profit more than double. This has been largely due to the established businesses the global giant has in Europe in the US, but Australia has also seen an increase in business for the company. In the local market, it was found that the number of detached home approvals – which generate the most demand for the firm’s key fibre cement building products – was up 16 per cent to 104,394. Although profits have increased, the company has also seen an increase in asbestos claims made against the corporation.

Asbestos claims on the rise

In the past, James Hardie used materials that contained asbestos, back when the substance was not known for its negative effects. Since the banning, the corporation has been proactive in helping compensate those affected by asbestos through their products.

The company says accounting firm KPMG’s current estimate of total asbestos liabilities for Australia, net of insurance claims, has risen to $1.547 billion this financial year from $1.345 billion the last. The past year has seen a total of 608 asbestos-related claims, which was a 12 per cent increase from the previous year and also well above expectations of 540 claims.

The rise is believed to be due to the continued increase in claims by asbestos victims suffering from mesothelioma. Out of the 608 claims, 370 of those were for mesothelioma, a 20 per cent increase from the year before. Previously, KPMG expected only 300 mesothelioma claims in its forecasts for the company. If these numbers continue to rise, the company could be forking out more than a third of their operating cash flow under the agreement James Hardie made for asbestos compensation contributions.

Asbestos is a serious issue

Asbestos is a serious issue and big companies like James Hardie work hard to compensate those affected but sometimes you need something more personal. Organisations like the Asbestosis and Mesothelioma Association of Australia (AMAA) are available to assist, offering support, resources and events for those affected by asbestos. Call 1800 017 758 for more information.