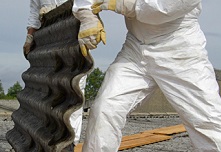 Australians are still at risk of exposure to deadly asbestos fibres due to the continual breach of the national ban on asbestos. Despite being asbestos being banned for over a decade, it is emerging that many products imported into Australia contain asbestos.

In the most recent incident, work was shut down earlier this week on the 1 William Street construction site in Brisbane.  The building, which will eventually house the Queensland Government, was found to have asbestos onsite in products imported from China.

Peter Tighe, CEO of the Asbestos Safety and Eradication Agency (ASEA) reported earlier this year of his concern of the “emerging problem” relating to the importation of materials containing asbestos from overseas.  He highlighted the dangers this posed to the community, particularly tradespeople who are working with asbestos containing products without realising it.  His concerns were echoed by union leaders, asbestos advocacy groups, and Senator Nick Xenophon who called for tighter monitoring and greater penalties.

This issue is of ongoing concern and will remain a significant focus of organisations like AMAA as we aim to minimise the impact of asbestos on all Australians.  AMAA endorses the ongoing efforts of ASEA to implement the National Strategic Plan to deal with asbestos in Australia and educate the community about the dangers of asbestos.

More information about ASEA and the NSP can be accessed at their website:

Reports of asbestos in the news: