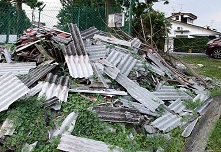 Asbestos is a dangerous substance that must be disposed of carefully. In Australia, although the material has been banned from use for three decades, it is still prevalent in many homes, structures and even the soil surrounding these. Contractors are then hired to identify and remove the asbestos to ensure the building or plot is safe. Dib Hanna was one such contractor, except instead of disposing of the substance at the correct facilities, Hanna dumped the asbestos waste illegally.

With dozens of criminal convictions and 20 fines for illegally dumping building material across Sydney, the illegal dumping of asbestos is just another in a long line of offenses for Hanna. The contractor was found on CCTV dumping eight truckloads of hazardous waste, including asbestos, on residential land.

The man broke into the site in 2012 to dump the waste on a block of land that the owners were planning to build on. The residential land, in New South Wale’s Picnic Point, is now seriously contaminated, posing a threat to the owners’ plans and nearby residents. Having been caught on CCTV, Hanna was then taken to court where he faced multiple charges.

The court gave him a three-month suspended jail sentence and good behaviour bond for contempt of court order to stop illegally dumping hazardous material. He also has to pay off hundreds of thousands of dollars in fines – $300 monthly – through the New South Wales Debt Recovery Office. At this rate, it is estimated it will take until 2072 to be paid off, when Hanna will be in his 90s.

Hanna said the costs of dumping the waste in the right facilities meant he was getting no profit from his work and, being seriously ill, had to resort to the illegal dumping to make ends meet.

No matter how desperate you may be, cutting corners is never going to end well when handling asbestos. It is important to get professional advice and help. If asbestos has affected you in some way, get help from AMAA today.