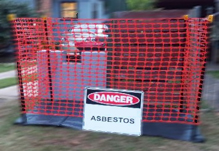 The end of 2013 saw the beginning of the National Broadband Network (NBN) rollout. Although this has been paused since the Abbott government was appointed, the use and alterations of Telstra’s infrastructure across Australia has caused much concern among asbestos groups.

North of Brisbane, a Telstra contractor found asbestos near a recently replaced telecommunications pit late last year, sparking worry across Australia about the presence of asbestos in pits. With only a thin layer of land fill over the pits, the asbestos could quickly become a danger for neighbouring residents, contaminating the soil and, if the fibre were to become airborne, risking the health of people in the area.

Coutts Contracting is believed to be the source of the asbestos laden pits, as the firm was responsible for replacing dozen of pits in the suburbs of Caboolture and Morayfield between August 2011 and October 2012. It is believed they failed to use appropriate procedures to remove the asbestos and ensure the area was free from the contaminant. The company is currently under investigation.

Asbestos awareness is extremely important and being aware of the dangers and where to get support can be helpful for all Australians. Although the substance was banned decades ago, it is still prevalent across the country.

For more information or to get support for you or someone you know, talk to the Asbestosis and Mesothelioma Support Group (AMAA) on 1800 017 758 today.